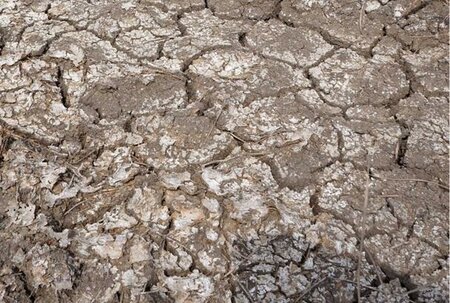 There is a myth that the Romans rendered the lands around Carthage infertile after their victory in the third Punic War by spreading salt on the land. Whilst there might have been symbolic scattering, the cost of salt in 146 b.c. would have been prohibitive. Nevertheless, the tale, although apocryphal, is indicative of how the curse of salt on the environment has been recognised for centuries.

Leather manufacture can result in substantial discharge of salt, some of which is associated with the salt used when pickling in preparation for tanning. However, the major impact is associated with preservation, which then leads to an emission load around 65 kg/t chloride when processing salted hides; substantially higher than a load of around 5 kg/t chloride when salt-free hides are processed [i].

Most countries determine a maximum permitted concentration of sodium in drinking water (in the UK it is 200 mg/l (tap water is typically <20 mg/l). Given that approximately 15% of the weight of a salted hide is sodium chloride, a 30 kg salted hide is likely to contain approximately 4.5 kg of salt, of which 39% (1.77 kg) is sodium. Almost 9000 litres of pure water would be required to bring the discharged salt to within UK drinking water standards for each hide processed.

There have been many studies on the impact of salt on fresh-water aquatic life as this is a topic of concern in cold climates where salt may be applied to roads in the winter months. Different species have been found to have different degrees of tolerances to salts. The concentration at which salinity begins to become stressful to most freshwater organisms is not well characterised but occurs somewhere between 500 – 1000 mg/l [ii].

Different crop types have different tolerances to different types of chemical so the concentration limits for irrigation are dependent upon several factors such as the type of crop being grown, the existing soil quality, climate etc. Regarding salt there are two classes of hazard which are salinity hazard and sodic hazard. In saline soils plants wilt because the roots are unable to absorb water. Sodium hazard is expressed in terms of the sodium absorption ratio (SAR). Continued application of water with high sodium levels results in physical deterioration of the soil which becomes hard, compact, and impervious to water penetration.

It has been estimated that worldwide 20% of total cultivated and 33% of irrigated agricultural lands are afflicted by high salinity. For a variety of reasons, many of which can be associated with global climate change, the salinised areas are increasing at a rate of 10% annually. A saline soil is generally defined as one in which the electrical conductivity (EC) of the saturation extract (ECe) in the root zone exceeds 4 dS m−1 (approximately 40 mM NaCl) at 25 °C and has an SAR of 15%. It has been estimated that more than 50% of the arable land could be salinized by the year 2050 [iii].

The discharge of salt is recognised as an environmental hazard and currently incurs a penalty in the LWG protocol. There is an effective reduction in the penalty if salt is recovered and disposed of securely (i.e. does not enter the environment). The LWG protocol is reviewed periodically; the updates are designed to promote and encourage continuing environmental improvements. The current (P6.6.2) approach can therefore be considered as a steppingstone to a more rigorous approach to waste salt in future versions of the protocol. All costs associated with recovery of salt need to be considered, for example the very high energy requirement associated with Reverse Osmosis. Whilst this energy requirement would currently be considered for tanners who operate their own RO equipment the current protocol does not take account of the energy requirement if it occurs in a common effluent treatment plant. Secure disposal must mean what it says - storage in preparation for secure disposal is not the same as secure disposal. There is still a potential for stored recovered salt residue to enter the environment and cause damage. Only when there is clear evidence that no salt could enter the environment should allowances be given.

The apparent lack of a technological or economic response to salt pollution (or the potential for salt pollution) cannot be considered as a justification for a avoiding the issue. Salt use is an aspect of nearly all leather manufacturers that include tanning as part of their operations, and it has a potential impact on the environment as an environmental pollutant. The Technical Sub-Group is currently working on the drafting of the next version of the protocol (P7). The issue of salt has already been identified as one that will be subject to specific examination during the development of the new protocol.

[i] Integrated Pollution Prevention and Control (IPPC) - Reference Document on Best Available Techniques for the Tanning of Hides and Skins. 2001:pv